“Sydney is a clever magician who plies his craft with great skill and subtlety, making paintings that are seemingly simple, but their plain reality tenders deeper emotions than simple recognition. You don’t just see the land here, you feel it… these hills, these skies give us a voice that is unique, a voice that is evoked by the art of Grahame Sydney. It is the voice of us all.” 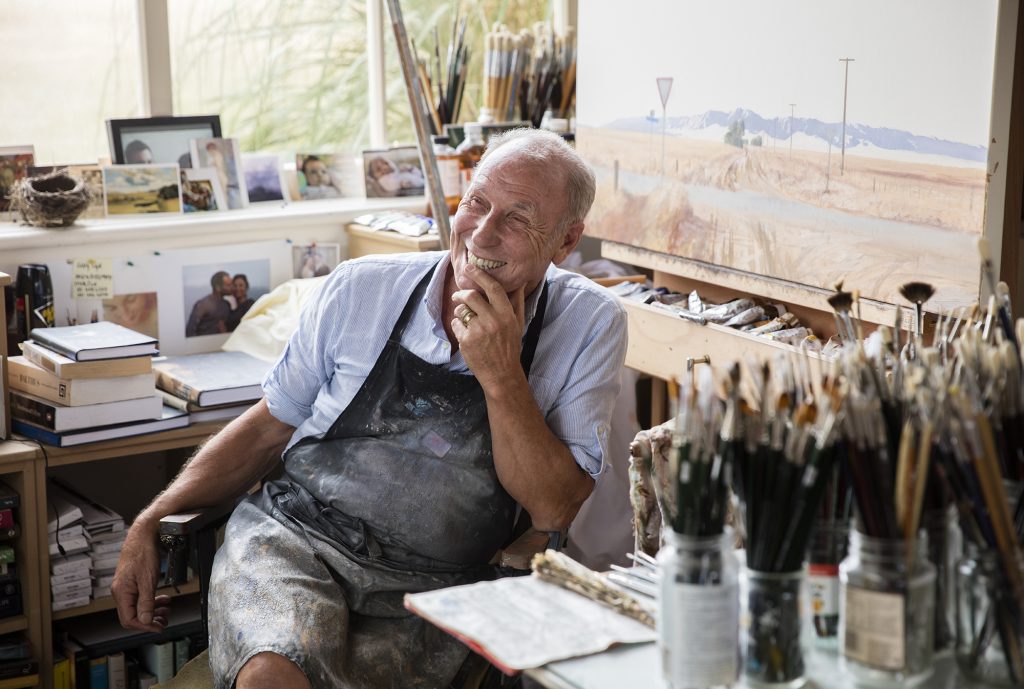 Grahame Sydney KNZM has become one of New Zealand’s most significant and enduring artists.  Awarded an ONZM in 2004 and then knighted in 2021 for services to the Arts, his work spans over 4 decades and encompasses oils, watercolours, egg tempera, lithographs, etching and photography. Rarely exhibiting, Grahame’s works are held in private collections through-out the world and represented in the collections of New Zealand’s major galleries and museums. Only occasionally collaborating with dealers, he mainly paints for a private client list. Always a meticulously slow worker, he generally produces no more than six works a year.

Since 2003 he has lived and worked in a remote corner of Central Otago, close to his recurrent subject matter.

Grahame has travelled twice to Antarctica as guest of the New Zealand Government. Unable to use his usual media due to the extreme temperatures he turned to the camera, which resulted in a resurgence of his long-standing love of photography and the book ‘White Silence, Grahame Sydney’s Antarctica’ (2008).

Always a willing writer, Sydney is the author or significant contributor to several other books including: ‘Landmarks’ 2020 (a companion piece to ‘Timeless Land’ written in collaboration with Brian Turner and Owen Marshall), ‘Grahame Sydney Paintings: 1974 – 2014’, Grahame Sydney’s Central Otago’  2011 (photographs), ‘Promised Land’ 2009 (gold history of Central Otago) and the much loved ‘Timeless Land’ (1995 [now in its fifth reprint]).’

To learn more about the artist we recommend ‘Landmarks’, (2020), ‘Grahame Sydney Paintings: 1974 – 2014’ and ‘The Art of Grahame Sydney’ all of which include a significant selection of paintings and detailed essays. Or refer to the list of Resources below.

Copyright © 2022 The Art of Grahame Sydney. Powered by