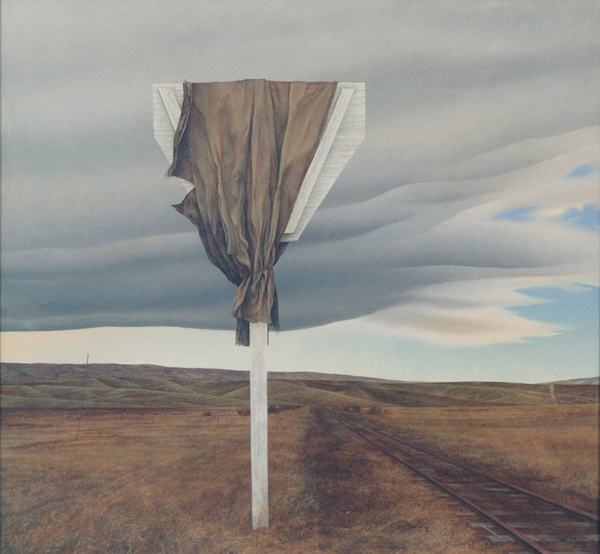 There is good reason to believe that Grahame Sydney placed a special importance on this painting since in at least two early survey exhibitions, at the Dunedin Public Art Gallery in 1981 and at the Robert McDougall Gallery in 1982, he placed it as Number 1 in the catalogue. It had already been shown at the McDougall Gallery in 1977 when it was on the cover of his Paintings & Drawings catalogue. It has also been reproduced in several books, including Elizabeth Caughey and John Gow’s Contemporary New Zealand Art 2 (1999) and in Timeless Land by Grahame Sydney, Owen Marshall and Brian Turner, a book that has been reprinted five times.
All this attention and recognition signifies a major work by an important painter and it thoroughly deserves its status. It is a knock-out work, a classic example of Grahame Sydney at his best.
What makes it so memorable? Partly it is the monumentalizing of something so ordinary – an old railway sign wrapped in a ragged piece of cloth which obscures the words presumably written on its dirty white surface; probably SLOW, given the title of the work, though the title is deliberately ambiguous and multiple in its connotations (Sydney didn’t study literature at university level for nothing).
Then there is the tremendous Central Otago land-and-skyscape against which the sign stands (the low point of perspective emphasizing its height) – a featureless brown plain, vast and empty, through which railway tracks, probably disused, run from the bottom right corner into the middle of the picture, the point where sign, hills and sky coincide. And what a sky – huge, moody, subdued in colour, folded like a grey blanket and feathered at the edges – a remarkable act of observation and recording. The whole painting is a symphony in quiet and muted tones, ineffably melancholy in its sense of abandonment and decay, but majestic, too.
It is tempting to try to unpick some of the connotations of the image and title. It is a painting of a sign, but a sign whose meaning is covered up, obscured. A sign which in one sense does not signify, but in another sense is eloquent in its ramifications. The old sign dominates the painting as the cross does in a Crucifixion scene. Is this resemblance intended or not? ‘Then certain of the scribes and of the Pharisees answered, saying, Master, we would see a sign from thee’ (Matthew 12, 37). And Jesus replied, ‘An evil and adulterous generation seeketh after a sign; and there shall no sign be given to it‘(12. 39). Is Sydney’s poetic image that of a world abandoned by God and man, a world in which no sign is given? Whether or not such metaphysical speculations are relevant the painting stands apart from them wholly satisfying in its conception and execution, fully justifying the slow, painstaking process of working with multiple layers of tempera pigment, stiffened with egg-yolk, just as used by the old masters.

Copyright © 2022 The Art of Grahame Sydney. Powered by